Six years ago, USA Today published an article called “Generation Y’s goal? Wealth and fame.”  In her story, Sharon Jayson cited findings from an intriguing Pew Research Center poll.  Specifically, 81 percent of 18- to 25-year-olds who were surveyed believed getting rich is their most important or second-most-important life goal; 51 percent said the same about being famous.

The article went on to point out, the Pew telephone survey of 579 young people described the “millennial” generation (also known as Gen Y), who were born since the early 1980s and were raised in the glow and glare of their parents’ omnipresent cameras. While experts say it’s natural for humans to seek attention, this generation revels in it.

Flash forward to Edward Snowden and the frenzy of news coverage surrounding his mass surveillance program leaks.  His identify was made public at his request on June 9, 2013.  At that time, Snowden made the following statement, “I have no intention of hiding who I am because I know I have done nothing wrong.” Really? 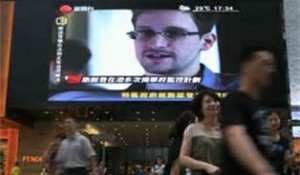 A big TV screen shows news coverage on Edward Snowden, who is the famed leaker of mass surveillance program information.

If Snowden did nothing wrong, then why is the Justice Department seeking to prosecute him for one of the most significant national security leaks in our country’s history?

Personally, I’m not buying his premise.  I believe Snowden’s actions were carefully calculated in his attempt to become famous.

Before last month, how many of us knew Snowden existed?  His leaks about mass surveillance programs resulted in immediate fame and nearly four weeks (and counting) of non-stop news coverage.

An amateur film about Snowden created by Edwin Lee, a freelance videographer, already has garnered 43,000 views on YouTube.  (Not bad visibility for Snowden, who wasn’t even on our radar screen on Memorial Day.)

At a minimum, Snowden has forever made his name synonymous with espionage.  Also, his fame will be firmly secured as a result of a possible Hollywood movie, potential book deals and publicity from a federal trial.

The allure of fame, money and in some cases, infamy, is overriding the greater good of society.  Snowden is just one example of an individual who chose to place himself in the limelight’s glare.  Whether his intent was personal, political or for the greater good remains to be seen.