Memories of the legendary W.A. Krause

My heart has been very heavy since learning W.A. (Bill) Krause passed away earlier today. It’s a feeling of immeasurable loss. To the entire Krause family and their closest friends, I extend my deepest sympathy to them during this difficult time and dedicate the following column to the memory of Bill Krause.

Bill Krause was an extraordinary human being. He had a wonderful smile, a brilliant mind and a deep passion to help others. Whether it was contributing a kiln to a small Iowa high school art department, hiring an enthusiastic prospect or inspiring young people through Junior Achievement, Bill did not forget the importance of helping others.

If you ever met Bill, it quickly became apparent that his firm handshake was indicative of his overall approach to life. He loved people and constantly sought to make a difference in their lives. He was known for his big bear hugs, talent for remembering names and ability to think outside of the box. 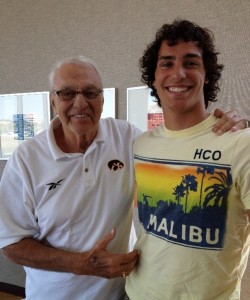 The late W.A. “Bill” Krause visiting with Zach Page in the summer of 2012.

Whenever others approached him to share news about their families, children or jobs, he listened with rapt attention. He never forgot his small town roots. Last summer, when my cousin was visiting from the huge “metropolis” of Olivet, Michigan – (pop. 1,650), Bill took the time to privately meet with Zach Page. The time with Bill meant the world to Zach, who has been an entrepreneur since age 13 and was about to enter his first year of college.

When he co-founded Kum & Go with his father-in-law (Tony Gentle), it was a game-changer. Prior to 1959, gas stations merely offered fuel and mechanical repairs. Bill and Tony had the foresight to bring “convenience” to their customers by providing food, beverages, snacks and a wide-range of consumer products.

In the early days, Bill did everything from waiting on customers to stocking shelves to driving a fuel truck. On weekends, he would pile his wife (Nan) and the children into the family car to visit their ever-expanding convenience store chain and see first-hand how things were going.

Today, Kum & Go is owned and operated by his son, Kyle. It is the fifth largest privately-held convenience store in the U.S. and employs more than 4,600 associates in 11 states.

That was Bill Krause

If you ever went to pre-game festivities during University of Iowa football season, Bill was easy to spot outside of the stadium. He would be proudly wearing Hawkeye colors and ensuring the people around him were having a good time. It was difficult to find a more proud alumnus or benefactor anywhere in Iowa.

Bill was known throughout K&G for using “one-liners” (quotes) to make a point, inspire an associate or mark an occasion. It is with that in mind, this column ends with the following quote by Mitch Albom to honor Bill Krause.